Get $20k with the We Got You Promo NOW thru 5/31. Meet the Miramar 2054! This home features our gorgeous Rustic Bronze package including brushed nickel door knobs and bla...

Welcome HOME to Havencrest in Star. This beautiful five bedroom, 2.5 bath home sits on over 1/4 acre and RV parking. The main level has a large living space with firepla...

Cute as-a-button home in the heart of Star has so much to offer! Tucked out of the way, yet near the downtown area, this home features 3 beds, 2 offices, and 2 living are...

Bring your dreams, toys and plans to WESTPOINTE, one of Star's most desirable subdivisions. Large 0.675 acre lot with no back neighbors at the end of a cul-de-sac. Enjoy ...

Gorgeous 5.17 acre parcel with mountain views 3 min from Downtown Star. Build the home of your dreams in this peaceful setting! Tucked down a private lane, no CC&Rs, se...

This single-level beauty located in a quiet peaceful community in Star has been meticulously maintained. Features include a warm and welcoming great room with rich wood t...

Beautiful home in premier Hillsdale Estates. Over an acre of level land surrounded by rolling hills and panoramic views. The back faces East and provides a view of the ...

Live the outdoor Idaho dream in this meticulously cared for home on a quiet cul-de-sac in Star’s coveted Westpointe community. Boasting an east facing backyard on .74 wel...

There's nothing quite like the serene setting of Hillsdale Estates. Nestled amongst the rolling foothills and adjacent to the community equestrian center, you won't find ...

This spacious single-level one-owner home with no backdoor neighbors welcomes you to Star, Idaho. Light, bright, and open. The inviting entryway leads you into the airy s...

Timeless & seamless treasure with expansive, private backyard! This .36 acre lot gives you space & privacy above others! Relax in your choice of two covered patios while ...

A Shining Star in Star. IDAHO is must see single-level residence in a quiet cul-de-sac, next to a walking-green space park for picnics. Immaculate home 9' vaulted ceiling...

Ted Mason Signature Homes presents the Chelsea! Backing up to Hope Springs' meandering seasonal creek, this home is perfect for entertaining or relaxing and taking it al...

Not your typical plan, welcome to the Molenaar by Venta Homes. Bring your toys for this RV bay with a 14' door that is insulated and epoxied. Inside you are greeted by ri...

Just finished, the "Barber." A sweeping 2 story entrance welcomes you in while the kitchen & oversized great room are tucked privately out of sight. The memorable factor ...

Beautifully built home in an exclusive neighborhood along a golf course. Huge vaulted ceilings as you enter with a wall of windows for the view. A hidden bonus room and e...

Located in the area of impact. Excellent opportunity for development, with some view lots and water views. 3200 sq ft Single family home has No3 hickory floors, 12ft ceil...

Located in the area of impact. Excellent opportunity for development, with some view lots and water views. Single family home has No3 hickory floors, 12ft ceilings, grani...

Information courtesy of Intermountain Multiple Listing Service. Information provided by IMLS is deemed reliable but not guaranteed. IDX information is provided exclusively for consumers' personal, non‐commercial use, it may not be used for any purpose other than to identify prospective properties consumers may be interested in purchasing. IMLS does not assume any liability for missing or inaccurate data. All listings provided by IMLS are marked with the official IMLS IDX icon.

Driving through the city of Star is similar to most of small-town America with 1 stoplight and the local Star Merc [Mercantile] and Star Cafe being the cornerstones of the community. It has always been a quaint town nestled on the outskirts of Boise. But with the growth of cities like Boise and Meridian, Star is becoming a sought after area for those expecting the sunset views and a little piece of their own private Idaho.

They say the name of Star was originally adopted from those traveling west from Boise to Middleton and saw the “star” on the old schoolhouse which helped to know the East and West directions. In 1905 it incorporated and established city limits spanning 4 miles in each direction yet was not officially recognized as apart of  Ada County till December of 1997 -  92 years later.

The geography of Star is very attractive to newcomers and similar to that of popular neighboring cities like Eagle and Middleton:  foothills and public BLM (Bureau of Land Management) land to the north, flat farm ground and State Street/Highway 44 in the center for ease of travel, and the Boise River to the South providing many options and lifestyles. And with cities like Eagle and Boise growing significantly, naturally, Star has become a hidden secret for those looking for affordability and seclusion.

With that demand, development has followed. The population of Star was roughly 5,700 in 2010 and in the last 10 years has doubled in size making one of the fastest-growing cities in Idaho during that time. Developers are actively seeking land but have been able to establish neighborhoods such as Heron River (575 homes) and Rockbridge (272 homes) to supply the growing demand of needed homes in the area with more planned developments to come. In 2018, the city of Star approved the annexation of 1,554 acres for future development with a potential of over 3,000 more homes. Even with all of the coming growth, there are still as many acreage properties for those who relish the endeavor of raising their own cows or chickens, having a horse to ride on neighboring BLM ground or for fall hunting expeditions, or simply the feel of privacy and elbow room between neighbors.

Naturally, with families and homes coming to Star, more businesses and infrastructure are being brought in to service the community. A few restaurants like Pizza Hut and Dairy Queen have recently set roots as well as other local establishments and the well known local Albertsons is slated to build a modern grocery store in the coming years. Improved infrastructure has started and will continue in the near future as well. In 2014, Highway 16 was extended from State Street/Hwy 44 to Chinden Blvd/Hwy 20-26 providing another artery for commuters to quickly access Star and neighboring Emmett and that expressway is projected to extend all the way to Interstate 84.

We hope this gives you great insight into the community and with all of the planned future growth, Star will definitely be a contender with neighboring cities for those weighing a move to the Boise area.

Boise Houses For Sale By Area

•• Call To Schedule A Private Showing 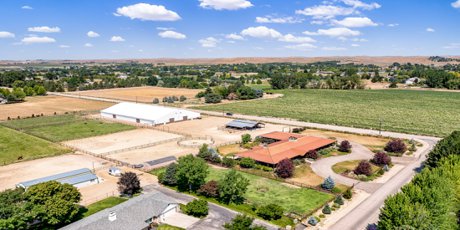 Buying A Home In Idaho

Selling A Home In Idaho